Skip to main content
Uppsala University The Baltic University ... About us Our History The 1st decade
Listen

The Baltic University Programme originates from the years of dramatic political change at the end of the 1980s and early 1990s. Until the then, the East-West divide had been very solid, a real iron curtain, which offered few opportunities for academic cooperation.

Uppsala University had however, exceptional and long-term exchange programmes with Tartu University in Estonia, Vilnius University in Lithuania and Charles University in Prague. They were operational during the Cold War, and the Academies of Sciences also managed a few contacts. But in general we lived in a divided world which the students of today never experienced and probably have difficulties imagining.

The changes started with glasnost and perestroika in the late 1980s. 1989 became the key year. In the summer of 1989 Solidarność was confronting the communist regime in Poland in the so-called Round Table discussions and the first partly free elections were held. In November 1989 the Berlin wall came down after an autumn of demonstrations and marches. In December the velvet revolution in Prague ended the communist regime, followed by the election of Václac Havel as President of Czechoslovakia.

East-West inter-university contacts slowly developed. Uppsala University Rector Martin Holmdahl was a leading person in CRE, the European Rectors Conference. As such, he was the first who was able to invite universities from all Europe, to the CRE conference in Uppsala in June 1989. Soon after, the CRE convened in Warszawa to establish the Copernicus Programme, an academic cooperation with a focus on environmental issues.

The interest for contacts specifically in the Baltic Sea region soon mounted. In April 1989 my proposal to develop a university cooperation in the Baltic Sea region based on satellite TV was supported by Uppsala University. In early 1990s several university rectors met to establish the Conference of Baltic University Rectors, CBUR. Professor Lucia Baskauskas, an ex-Lithuanian from Los Angeles, organised the Baltic Family Conference. Thus in October 1990 a group of Swedish participants came to Vilnius airport in a leased military DC3 airplane welcomed by guards with machine guns. It was still the Soviet Union!

In the meantime, the structure of what became the Baltic University Programme developed. The first conference devoted to develop a satellite-TV based university network. It was convened by Uppsala University, and hosted by the Swedish Telecommunications School in Kalmar, in February 1991. The invitation to this meeting had not been easy. The knowledge of universities in communist Central and Eastern Europe was minimal. Where to write invitation letters and to whom? We expected 20 universities. But 33 came. The conference was staged just weeks after the attack by the Soviet military in Vilnius in January when 13 young protesters were killed and all TV towers in the Baltic States occupied by Soviet soldiers. The Kalmar Meeting sent a letter to Gorbachev asking for respect for the free flow of information and human rights.

The Kalmar conference was unanimously deciding on developing a Baltic Sea region university network to produce a satellite TV based course. It was focusing on the environment and to be called "The Baltic Sea Environment". The title had intentionally a double meaning, both alluding to environmental science and the geographical area. All participants were encouraged to make short video documentaries on environmental issues from their countries.

Two critical issues had to be solved in the coming months. First financing. The Swedish Authority for supporting cooperation with Central and Eastern Europe, called BITS, now with a focus on the Baltic Sea region, was providing the basic funding. Additional support was received from a university consortium of Uppsala University, University of Copenhagen, Åbo Akademi University and several other Finnish universities as well as from the Swedish Telecommunications Company, Teracom. Secondly, the satellite TV part was dependent on us finding competent and willing (not to say enthusiastically) colleagues in the sector. The good news was that the Nordic TeleX satellite became available and had coverage ideal for the Baltic Sea region. Teracom’s Roine Modig organised everything to run the satellite TV. A small secretariat for BUP was created at Uppsala University to coordinate all this.

In the spring and summer of 1991, the number of universities which wanted to take part increased all the time. In the month of May, it had reached 70. Teracom offered the participating universities satellite receivers and satellite discs for a reduced price. Some were shipped and I personally brought many to the universities. On the brink of boarding the ferry to Tallinn 21 August 1991, the trip was interrupted as news on the putsch in Moscow came. Streets were occupied by tanks. The failure of the putsch was in practice the beginning of the dissolution of the Soviet Union and the independence of the three Baltic States were recognized a few days later.

The first satellite TV broadcast was staged in October 1991. It had two hours filled with documentaries from many of the countries in the region and with several of the researchers present in the broadcast. Up to May 1992, ten such broadcasts were performed including two so-called space bridges, discussions between three universities in the network, each with many students taking part. For each broadcast, a small book on the topic was produced and distributed. That constituted the course literature. A total of 3 600 students in 9 countries took part in this very first course.

All broadcasts were done from different departments at Uppsala, Stockholm and Åbo Akademi universities which had contributed by writing guidebooks delivered to the participating universities. Student music bands entertained in the break in the broadcasts and researchers from the participating countries formed panels for each topic. A 3D model of the Baltic Sea itself were made by geographer Ulf Erlingsson to physically demonstrate how the water exchange between the Atlantic and the Baltic Sea occurred.

The continuation – our common regional history

During this first year of the Baltic University Programme, the first fully free election in Poland was held in October 1991. The Soviet Union was dissolved in December 1991. And a second and much stronger Convention for the protection of the Baltic Sea was adopted in spring of 1992. The number of BUP participating universities had increased to 84 and universities in Belarus and Ukraine had been invited to take part.

After the first pioneering year the enthusiasm for going on just increased. The universities continued to offer the course The Baltic Sea Environment for new student groups using the material available. Two more space bridges were broadcast to let new student groups be part of the discussions.

In the fall of 1992 plans were made for a second course. This time on the region itself, its peoples including the very many minorities, its history, languages and religions. It was much more of a challenge since here we started to run into sensitive areas. How to deal with Nazism and Stalinism? Some argued that this should not be done. My thinking was that we need to talk about this, especially young people need to talk about this. And then who should stage this if not universities?

In the spring of 1993 documentaries and books were produced for the new course Peoples of the Baltic, which was broadcast during 1993-94. This time the broadcasts were made not only from Sweden and Uppsala but from all countries around the Baltic Sea: from Visby, Åbo/Turku, St Petersburg, Gdansk and Berlin. And there were space bridges. A special effort was made to analyse security and peace building in the region and the concept of security community was introduced.

In the aftermath of the UN 1992 Conference on Environment and Development (UNCED), Rio, the concept of sustainable development had become more and more in focus. The Baltic University Programme introduced the topic for its students already in the spring of 1992 in the last broadcast of the Baltic Sea Environment course. Now it was time to let the topic of sustainable development have its own course. This time the books became much bigger than before and the TV material not any longer broadcast but distributed as videotapes. The course A Sustainable Baltic Region was delivered in the spring of 1997. The interest was again very large and a total of 4000 students followed. This continued the following years and at least some 50 000 students have learned about the basics of sustainable development over the years using this material, which was translated into Polish, Latvian and Russian.

The first decade of the Baltic University ended with efforts to bring the education to the master level. In 1998 the master course Sustainable Water Management was produced. By this time, the internet had become a working possibility and Satellite TV had come to an end. Discussions between student groups was made using this new channel for interaction. This course was finally made as a distance course with all material downloadable on the internet.

The BUP as More than education

At this stage, The Baltic University Programme started cooperation with municipalities in the region and began in several projects with a practical approach to sustainable urban development. Several laboratories for Geographical Information Systems, GIS, were established and research activities started. Participating universities in the entire Baltic Sea region, now including 14 countries, took their own initiatives and responsibilities for developing the Baltic University Programme, which had come to stay as a prime case of regional cooperation.

The basic idea – regional university networking - spreading around the world

The Baltic University Programme as a regional university cooperation became a success, and may be one of the largest networks of its kind. The inspiration to create a regional network grew out of a university network initiated by two legendary personalities, President Jean Mayer of Tufts University in Boston, USA and president Matsumaye of Tokay University in Tokyo, Japan. Both played key roles in the final year of WW II and were concerned about the increasing international tensions in the 1980s and wanted universities to contribute to disarmament and conflict resolution. I took part in establishing this network and made Uppsala one of its nodes, the other two being Boston and Tokyo. Satellite TV and satellite bridges were tried out in this network, an important experience when starting the Baltic University Programme.

Several others have explored and developed university networking during the years using the Baltic University Programme as a model and supporter. Already in the early 1990s nine countries around the Adriatic and Aegean Seas started Uniadrion, a network with some 40 universities coordinated in Bologna in Italy. Similarly a number of universities around the Black Sea, Black Sea Universities Network coordinated in Rumania organised summer seminars on all kinds of topics, often on advanced level, on the Black Sea coast. With Swedish support, the BUP contributed to a university cooperation around Lake Victoria in East Africa. The university in Montevideo, Uruguay, in the Rio de la Plata region in South America organised a conference together with BUP. Much later we had similar deals with the Great Lakes district in North America, with a number of universities in East Asia, coordinated in Yokohama in Japan and most recently in Central Asia coordinated in Samarkand in Uzbekistan. Several of these are still active but all much smaller than the Baltic University Programme.

Text on the second decade of the BUP

was the BUP director from 1991-2007 and 2015-2016. He has his background in Biochemistry, but have been active within the field of sustainability science since the early 1990s. He is the editor and author of many books, including Environmental Science, Environmental Management I-IV, Sustainable Urban Development, Rural Development and Land use, and others. 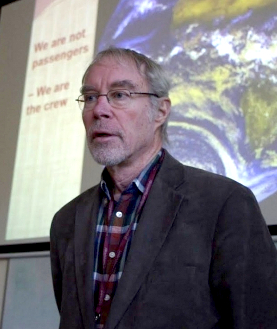