Henner Busch is the Scientific coordinators for the Urban-Rural theme at the BUP symposium. He works as a Post-Doc researcher with urban climate governance at the Department of Human Geography at Lund University 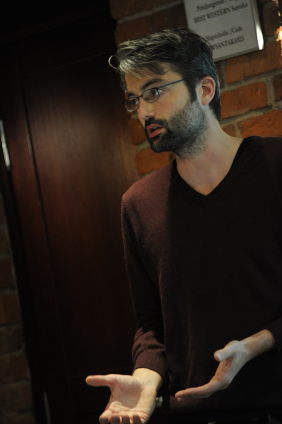 How did your interest in Urban-Rural Development begin?

I grew up in Berlin, a city with roughly 3.5 MIO inhabitants. However, my parent’s house is just a 5 min walk from one of the big city forests. So I guess I somehow grew up between city and forest. In my master programme, we had a pretty intense 7-week course on System Thinking. It sharpened my view for urban-rural linkages. Since then my research has been oscillating between the two ends of the spectrum. I wrote my biggest course paper on solar panels in Berlin, then I wrote my master thesis on renewables in rural Brandenburg, for my PhD I went back to cities and looked at climate policies and in my postdoc I am looking at community energy projects which mostly take place in rural settings.

How do you work with Urban-Rural Development today?

I guess if you work on renewable energy, you can’t really get around the topic of urban-rural linkages. I am particularly interested in if and how concepts for energy production that work well in rural settings can be transferred to urban areas. So I am often searching for the similarities between urban and rural communities. Another theme that I am very interested in is Energy Justice. It raises the question who benefits from energy systems and who bears the burden. A really big share of our energy that we use here in the South of Sweden comes from the mostly rural North. We urban citizens benefit and the rural population up North bears the burden because wind turbines and hydro plants put a heavy burden on people up North. For example, traditional reindeer herding becomes very difficult if the entire landscape becomes peppered with wind turbines. Energy Justice highlights the trade-offs and conflicts between urban and rural interests that otherwise might stay invisible.

What goals do you have with your work?

You mean apart from the minor issue of earning a living? Well, as a researcher in sustainability science I deal a lot with questions of justice. How can we find societal arrangements that are fair, both between and within generations? If I can make a tiny contribution to how we can solve this puzzle, I guess I have succeeded.

What role do you think networks among universities in the Baltic Sea Region plays in achieving these goals?

I am now working at the geography department here in Lund. Geographers always look for the links between different places. Geography focusses on how resources, culture, politics, so basically people influence each other. Networks can help us see these links while at the same time learn from the differences between us. But most of all, networks like the BUP teach us that we all sit in the same boat, especially when it comes to sustainability issues. What we do here in Sweden does not happen in a vacuum. Our actions here might influence people’s lives in Belarus or Northern Finland. Understanding this can help making us more aware of the unintended consequences of our decisions and make us more responsible.

What role do you see The Baltic University Programme has in collaboration between universities in the Baltic Sea Region?

I think the BUP makes a very important contribution to overcoming barriers. Most of them mainly exist in our heads though and exchange can help us overcome them. I can use myself as an example. I got involved in the BUP not because I was very interested in the interaction between Baltic states or the like. I got on board because my good friend Pontus Ambros started a job at BUP and I am really bad at saying “no”. But now I have to say that I am very happy that I got involved and got to learn so much about what links the different sides of the Baltic to each other.