Current Trends in Ensuring the Sustainable Development of Water Bodies

Anthropogenic activities and emergencies have led to significant pollution of the environment, in particular water bodies, which is gaining global scale and causing undesirable consequences for humans and ecosystems. According to the forecasts of the Ukrainian experts, further intensive industrialization will lead to irreversible environmental changes and a catastrophic reduction of relatively clean freshwater resources in Ukraine as a source of drinking water.

Taking into account the results of monitoring studies in recent years, surface waters of Ukraine are classified as water quality class 3-5, and the most environmentally hazardous toxicants are radionuclides (137Сs) and heavy metals (Cd(II), Cr(VI), Zn(II)).

Nowadays much attention is paid to the use of phytoremediation technologies to improve the condition of water bodies. In world practice, various phytoremediation systems are used, in particular hydrophytic structures using higher aquatic plants and aquatic biota.

Traditionally, the functioning of the bioplateau is based on the transiting of contaminated water through a system of biofilters located on the soil surface. This treatment scheme makes existing types of plateaus limited in terms of mobility and capacity, and the use of higher aquatic plants as biological components complicates the operation of the plateau. However, it is known that not only higher aquatic plants are characterized by high levels of accumulation of ecotoxicants, but also higher terrestrial plants in aquatic (hydroponic) culture have a high sorption capacity for radionuclides and toxic metals. 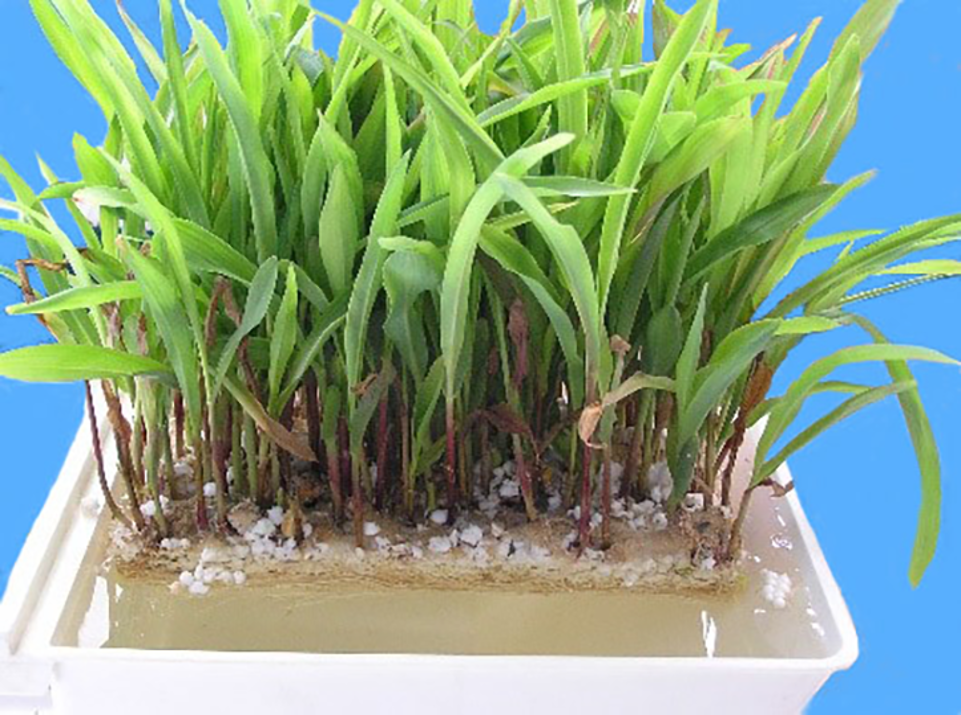 Despite the achievements in the usage of bioplateau, the need for scientific justification for the development of phytoremediation technology, which consists of studying the absorption capacity of terrestrial plants and creating an effective hydrophytic structure such as bioplateau, is an extremely important task.

The study was conducted with the purpose of the experimental development of method of water purification of 137Cs ions and heavy metals (Cd(II), Zn(II), Cr(VI)) using a new design of a bioplateau, which is based on the use of terrestrial plants.

In designing the bioplateau dishes were used; the dishes had the following sizes: 21 × 2.5 × 2.5 cm. The bottom of a dish was covered by a layer of granulated foam plastic 1.5 cm thick; on top of foam plastic a layer of perlite is put (70 cm3); 100 cm3 of settled tap water was poured into the dish; pulverizer was used to moisturize the surface of the substrate and the following seeds were placed on its surface, cm3 Phleum pratense —5, Zea mays—40 and then place them into a thermostat at 24°C. The cultivation of plants in a solution of cesium-137 chloride was performed in glass containers, which were pre-treated for 3 days with 0.1 mg solution of stable cesium-133 chloride to prevent sorption of cesium radioisotope ions by the inner surface of the glass. Settled tap water was used. Once a day the solution was poured into a Marinelli vessel to determine the specific activity of the radionuclide on a gamma spectrometer SEG-001 "APK-C" -63. The initial specific activity of radiocaesium was 2.2 kBq / l.  After 8 days of germinating the seeds the bioplateau was placed into exccicators with the solutions of Cr(VI) (concentration 1 mg/dm3), Zn(II) (10 mg/dm3) and Cd(II) (1 mg/dm3). The samples of the solution (50 cm3) were taken on the 4th, 8 th, 16th, and 28th day. Also, a bioplateau consisting only of substrate (i.e. without plants), which was placed in exccicators with the corresponding solution of Cr(VI), Zn(II),  Cd(II).

The study revealed that on the 4th day of incubation, cadmium was most likely absorbed, in contrast to the subsequent stages of observation, when the difference in the levels of absorption of the studied metals almost leveled off. At the first stage of observation, chromium was absorbed most slowly. On the 28th day of incubation of the bioplateau in solution with chromium, the effect of water purification was 98%, and for Cd (II) and Zn (II) - 97% and 93%, respectively.

From fig. 4 it is established that after 24 hours. the level of initial activity decreased by 80%, and after 48 hours. - 90%. On the fifth day of incubation of plants in a solution of chloride 137Cs, the degree of water purification was almost 97%, which was mainly due to the absorptive capacity of plants of Zea mays.

Thus, a new method of constructing a floating structure of a bioplateau for purification of reservoirs from toxic substances, the biotic component of which is terrestrial plants, has been developed.

Thus, using the proposed design of bioplateauwill improve the ecological situation of the water techno-ecosystems.